This is the second part of our Matheran Guide based on our experience and here we are gonna talk about the wonderful toy train! as well as other options to reach Matheran from Dasturi car park. If you missed the first part here's the link.

Apart from the joy ride and spectacular sightings including streams and greenery one more advantage of taking the toy train is that it helps you omit the stiff climb by road as discussed in the last post.

There is a catch though! The toy train from Neral to Dasturi takes around 2 hours while the road takes only 20 minutes. During the summer months it can look painfully long. One more thing to keep in mind is that during the monsoon months of July to September the toy train is usually closed at all times. So this option is out of the list.


However there is a save! From the Dasturi Car park, you CAN board the train to Matheran town and this route is usually open even during monsoon. This is perhaps the best of both worlds. So you can climb by the road and reach Dasturi. From Dasturi take the short toy train trip of 20 minutes to Matheran town. The views are spectacular and the train is slow, enoyable and comfortable. 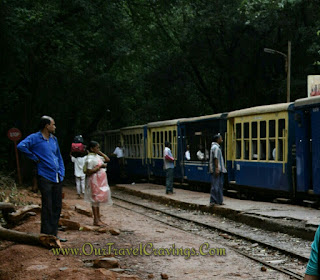 If you want to take the toy train from Neral itself, you can easily find the time-table online. However, you cannot pre-book it online. You have to buy it at the Neral railway station itself on the day of travel itself or you can buy it 3 days in advance (which is not so possible for travellers!).

The distance from Dasturi Car park to Matheran town is around 4-5 kms. We trekked the whole path alongside the railway track, This trek was one of the most exciting part of our trip. The rains playing peek-a-boo, the lush green scenery and red soil! What more can you ask for? We hired a porter for our luggage, put on our raincoats that we had bought (Always pre-check the weather conditions before travel - click here to know more about our travel essentials) and took out my Nikon D5300  for some initial clicks!


The trek took around an hour with breaks in the middle. The route is straight and not sloppy. The soil was muddy because of the incessant rains but the surroundings and the weather made it exciting. En route you can check around the hotels if you haven't booked already. We had pre-booked at The Westend Hotel which is located at the farther end which meant we had to cross the entire market and further trek to reach the hotel. (Here's the review for The Westend, Matheran)

If you do not want to trek, you can very well hire a pony or you can also hire a hand pulled single-person cart. (The carts are similar to the ones you see at your nearby mall!, oh, not really lol)

While returning from Matheran, we boarded the toy train uptil Dasturi car park. That short  ride of around 20 minutes was exhilarating! The train runs at a snail's pace but that gave us an opportunity to click some good pictures, being the "piccrazy" people we are!

Well, this was not the only toy train ride we took, a similar but longer(5-6 hours!!) to train operates from Kalka to Shimla (yes, the queen of hills and the ex summer capital of India). Read more of our toy train experience in Shimla here.


In the next part of our Complete Matheran Guide, we discuss the sightseeing places. Here we go again. Click here!

Read our Most Popular Posts!

The Beautiful Dal Lake, Srinagar and the scintillating Shikara experience

Hi Traveller,
Welcome to OurTravelCravings. We are a travel loving couple from India. For us, travel is not only an escape from our routine and monotonous work life but also an opportunity to experience this big and beautiful world. Through this blog we share our experiences of our holidays. This blog also fuels our desires for future travels. And yes, we are not professional travel bloggers. Neither are we adventure junkies nor do we have that adrenaline rush to climb the tallest of peaks or dive into the deepest of the creeks. But we do strive to maximise our travel stories as much as we can with minimum possible budget. Hence, we are budget holiday travellers with a passion for photography and blogging as well. We love exploring different places, people, cultures, food and experiences..And perhaps that is why we love travelling! We have a long to-do list and we hope to tick most of them if not all, some day in the future! We would be excited to have you as a part of our journey through this blog. Feel free to subscribe, share, like!
With Love and Wishes!
www.OurTravelCravings.com